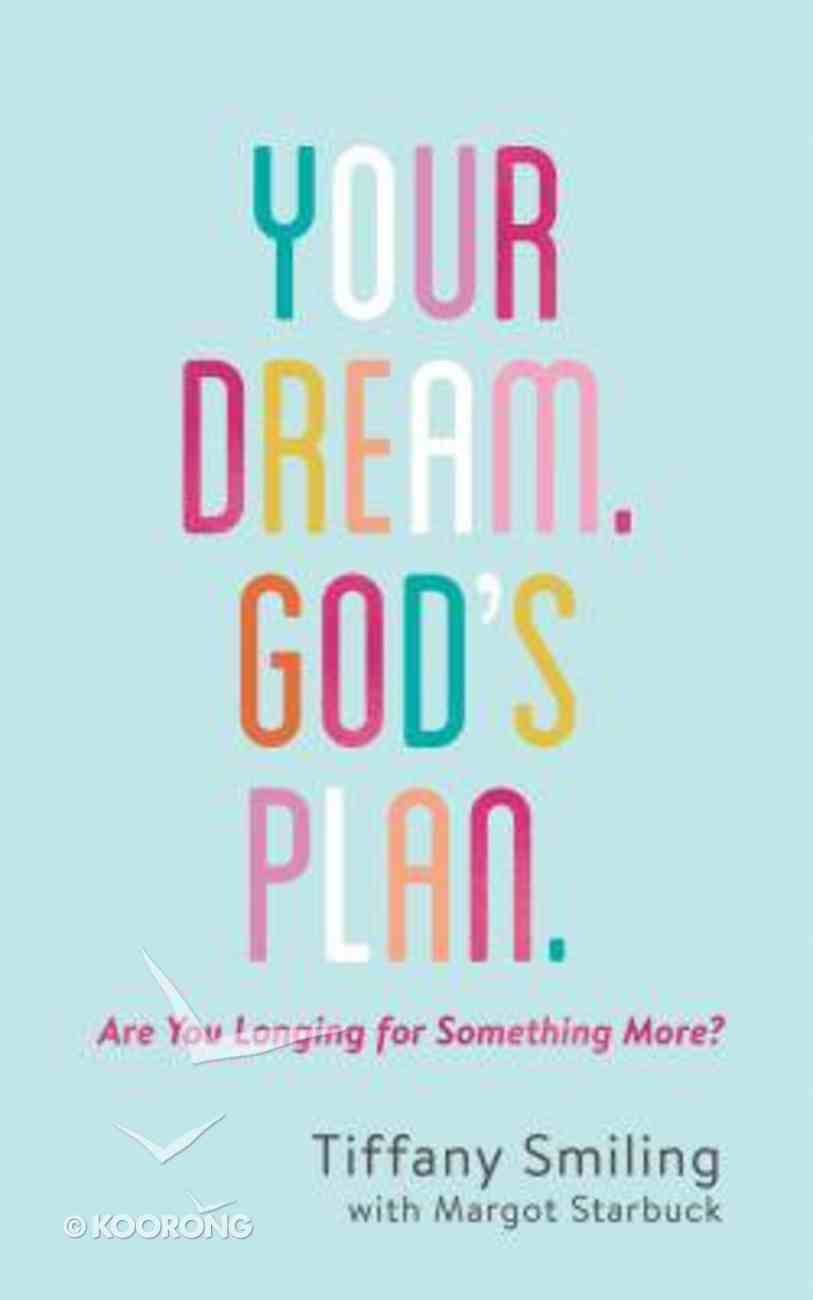 Your Dream. God's Plan: Are You Longing For Something More?

: In Your Dream. God's Plan. , Tiffany Smiling invites readers to join her as she shares the unlikely purpose she discovered when God invited her to exchange her dream for His. Her story will challenge readers to experience true...

10 available
Expected to ship within 3 hours from Australia.
Learn More
Free Shipping
for orders over $99.

:
In Your Dream. God's Plan., Tiffany Smiling invites readers to join her as she shares the unlikely purpose she discovered when God invited her to exchange her dream for His. Her story will challenge readers to experience true contentment now by trading in comparison, discontent, and fears of inadequacy for a satisfaction that lasts.

Margot Starbuck (M.Div. Princeton Theological Seminary) is a popular speaker at conferences and retreats and on college campuses. Previously Starbuck worked for six years as the Director of Spiritual Development at the Eastern Christian Children's Retreat in Wyckoff, New Jersey, serving women and men living with disabilities. She also served as the interim pastor at Ponds Reformed Church in Oakland, New Jersey.


Starbuck's recent activities include writing for a variety of publications such as Rev!, Pray and Neueserving as a volunteer with Reality Ministries, where she has the privilege of being friends with teens living with disabilities. She has recently written The Girl in the Orange Dress: Searching for a Father Who Does Not Fail and Unsqueezed: Springing Free from Skinny Jeans, Nose Jobs, Highlights and Stilettos.

Though she was given just three months to live as a child, today Tiffany Smiling--writer, speaker and entrepreneur--is changing the kingdom of God around the globe. She's a cancer survivor, an injustice fighter and, above all else, she is passionate about knowing Christ and making him known. nbsp; Born and raised in Tulsa, Oklahoma, Tiffany attended Oklahoma State University. During the summer before her senior year, she opened her own Orange Leaf Yogurt franchise and subsequently opened one other local business. Today Tiffany is utilizing her entrepreneurial skills to grow the kingdom of God through orphan care. nbsp; As a co-founder of Project Orphans , twenty-seven-year-old Tiffany has opened orphan homes in Uganda, Guatemala, Brazil and Haiti. nbsp; Convinced that when Christians truly know Christ they will go and make Him known, Tiffany has recently founded With All My Heart , an organization to equip this generation to know Christ deeply through the study of His word and, as a result, to respond to God's call to serve the world. The With All My Heart Foundation, currently building the Children's Village for Orphans in Haiti, serves children and others living in poverty around the world. nbsp; Tiffany Smiling is calling her generation to partner with God in redeeming the world He loves. nbsp;