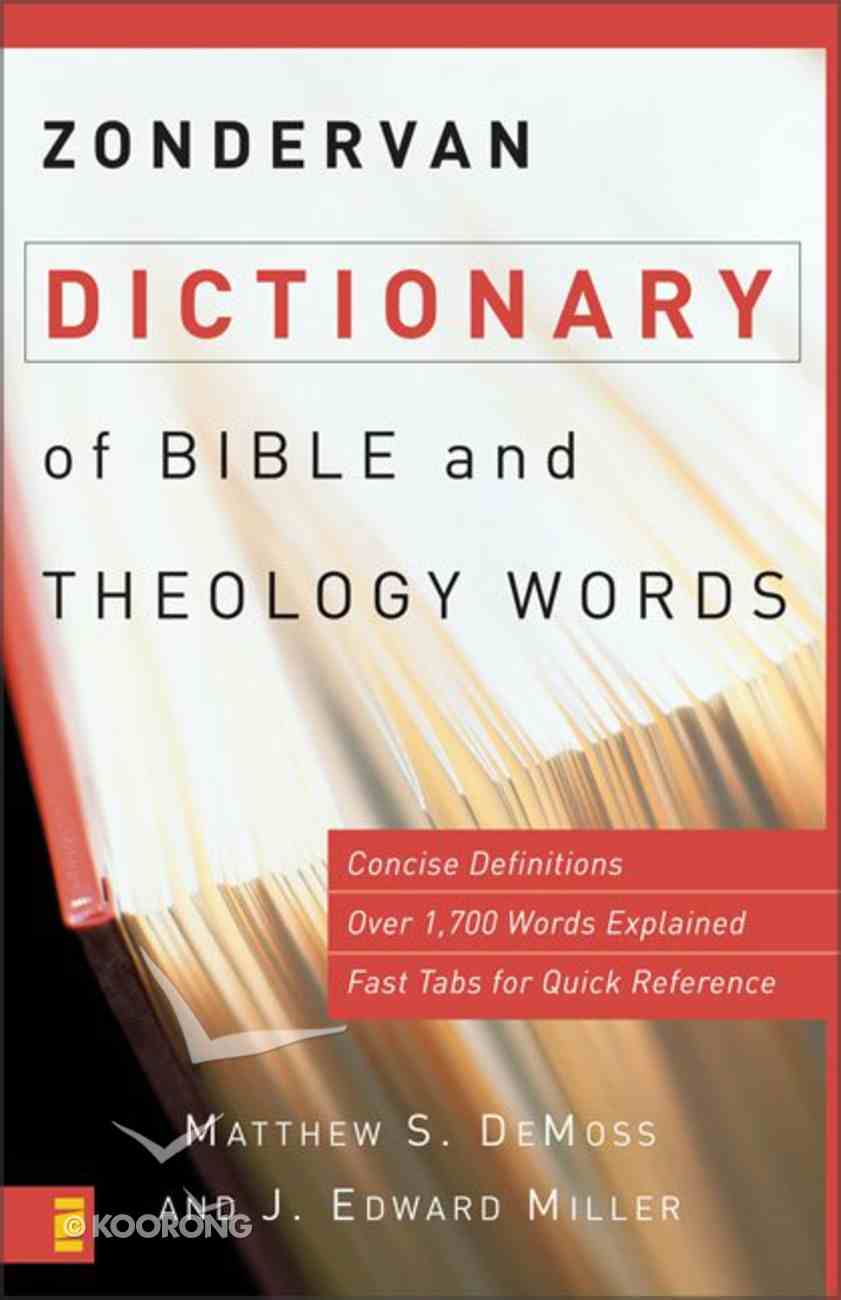 This easy-to-use dictionary will help all those who use commentaries and other popular theological works understand the technical and semi-technical theological terms that tend to creep into these books.

This easy-to-use dictionary will help all those who use commentaries and other popular theological works understand the technical and semi-technical theological terms that tend to creep into these books.

Reach for almost any commentary or other Bible study text and sooner or later (probably sooner!) you're bound to stumble over a word you don't know. Unfortunately, the dictionary doesn't shed much light on terms such as agraphon, deutero-Isaiah, pretribulationism, synonymous parallelism, Transjordan, or zugoth. Even words you are able to look up can have specific nuances and applications in biblical and theological study. What you need is a study book to help you understand the study books. You need the Zondervan Dictionary of Bible and Theology Words.This hugely practical volume puts the definitions you need most right at your fingertips. Over 1,700 words and phrases from Old and New Testament studies, biblical languages, and systematic theology have been compiled, alphabetized, and defined as succinctly as possible. You'll never be left scratching your head again. The Zondervan Dictionary of Bible and Theology Words is destined to become a staple reference tool for pastors, Sunday s
-Publisher

This dictionary is designed to help you understand the technical and semi-technical theological terms that tend to creep into commentaries and other popular works on theology. The 1,800 definitions are far more helpful and easy to locate than what might be found in a general dictionary.
-Publisher

A.D. Abbreviation of the Latin anno Domini, 'in the year of the Lord.' When used, this abbreviation precedes the year (e.g., A.D. 70). The designation C.E., 'common era,' conveys the same time description in nonreligious language. a fortiori A logical argument in which a conclusion is shown to be even more certain than a previous one; a 'how much more' statement (Lat., 'from the stronger'). For example, 'If you then, though you are evil, know how to give good gifts to your children, how much more will your Father in heaven give the Holy Spirit to those who ask him' (Luke 11:13). See also QAL WAHOMER. a posteriori In logic, denoting reasoning that is based on observation or experience instead of theory (Lat., 'from the latter'). See also A PRIORI. a priori In logic, denoting reasoning that is based on theory instead of observation or experience (Lat., 'from the former'). See also A POSTERIORI. Aaronic priesthood The line of Israelite priests traced through Aaron's two younger sons, Eleazar and Ithamar (Ex. 28:1; Lev. 3:2--4). In Hebrews 7 the Aaronic priesthood is contrasted with the priestly role of Jesus, who comes from 'the order of Melchizedek.' Leviticus 8--10 records the inauguration of Aaron's priestly dynasty, also referred to as the 'sons of Aaron.' Abaddon In the Old Testament, the place of destruction (Heb., abaddon, 'destruction'), the place of the dead, or the grave (see Job 28:22; Ps. 88:11; Prov. 27:20). In its one New Testament appearance, the word serves as a title for the angel of the ABYSS (Rev. 9:11). See also HADES and SHEOL. abba Aramaic for 'father.' Jesus may have been the first to address God with this word, for in Jewish literature prior to the New Testament period the term was used of fathers and rabbis, but never of God. In its three New Testament occurrences (Mark 14:36; Rom. 8:15; Gal. 4:6) the term is immediately followed by the word 'father.' abide To stay, rest, or remain. In Christian vernacular the word usually refers to one's responsibility to Christ based on John 15:1-- 11 (see also 1 John 2:24--28; 4:13). Some, however, understand the passages that speak of 'abiding' as referring to SALVATION rather than to the believer's commitment. ablative In Greek, a use of the GENITIVE case that denotes separation, usually requiring the preposition 'from' when translated into English. While some consider the ablative a separate case from the genitive (i.e., EIGHT-CASE SYSTEM), most subsume the ablative under the broad heading of 'genitive' (i.e., FIVE-CASE SYSTEM). ablution Ceremonial washing of one's body, clothing, or other objects for spiritual purification (see Ex. 19:10; Lev. 17:15--16; Mark 7:4; Heb. 9:10). See also CEREMONIALLY UNCLEAN. abomination of desolation A term that appears in Daniel (11:31; 12:11; see also 9:27) and describes an abominable, devastating act. Some translations unpack the expression as 'the abomination that causes desolation.' Likely it is a reference to Antiochus IV's defilement of the temple in 167 B.C.E., which led to the MACCABEAN REVOLT (1 Macc. 1:54). The New Testament quotations of this expression (Matt. 24:15; Mark 13:14) are commonly understood as referring to the destruction of the temple in 70 C.E. or to a yet future act that has been foreshadowed in these incidents (2 Thess. 2:3--4). Abrahamic covenant The unconditional promise of God to give Abraham physical descendants and the land stretching from the River of Egypt (the Nile River, or perhaps Wadi el-Arish in the Sinai Peninsula) to the Euphrates River. The COVENANT is first mentioned in Genesis 12:1--3; it is reaffirmed and described in greater detail in subsequent passages (13:14--17; 15:4--7, 18-- 21; 17:1--27; 22:17--18), including the rite of CIRCUMCISION (17:9--14). Abram Original name of Abraham, meaning 'exalted father' (Gen. 17:5). absolute state In Hebrew, the condition of a NOUN that is so closely linked to the preceding word or words that they are counted together, and whose TRANSLATION usually requires the English PREPOSITION 'of' (e.g., 'sorrows' in 'man of sorrows,' Isa. 53:3). See also CONSTRUCT STATE. abyss A bottomless pit, the underworld, or simply the place of the dead, especially when occupied by demons (see Luke 8:31; Rev. 9:11; 11:7; 17:8; 20:1, 3; see also Rom. 10:7, where it is translated 'the deep'). accusative In Greek, the CASE that normally marks a word as the DIRECT OBJECT of the VERB. acrostic A literary device in which lines, verses, or sections begin with consecutive letters of the alphabet. Acrostic poetry occurs a number of times in the OLD TESTAMENT (e.g., Pss. 111; 112; 119; Prov. 31:10--31; Lam. 1--4), but it is lost in translation. A active voice In Greek, the VOICE that conveys that the subject is the doer or the cause of the verbal action, as opposed to the PASSIVE VOICE, in which the subject is the receiver of the verbal action. Using various verbal patterns, Hebrew can convey the same thing. adiaphora Ethical or practical matters that are neither commanded nor forbidden in the Bible and are therefore morally neutral (Gk., 'things indifferent'). Many classify styles of church music as adiaphora. adjective A word that modifies a NOUN or a state of being. For example, 'good' modifies 'shepherd' in 'I am the good shepherd' (John 10:11). Adonai A particular form of a common Hebrew word meaning 'lord' that is used as one of the OLD TESTAMENT names for God, translated 'Lord' (e.g., Ps. 109:21). Although the common word,adon often refers to human masters (e.g., Num. 32:25), nearly every use of the specific form,adonay refers to God. Out of reverence for the name of God, those reading the biblical text often substituted the title 'Adonai' for the divine name 'YAHWEH.' adoption To take another's child and legally make him/her one's own. In the New Testament, adoption is described as one of the benefits of salvation (John 1:12; Gal. 4:4--5; Eph. 1:5). It speaks of the new standing that Christians enjoy, including access to God the Father (Rom. 8:15), a share in the divine inheritance (Rom. 8:17, 23), and the responsibility that comes from being God's children (Eph. 5:1; Phil. 2:15; Heb. 12:5--9). The word appears only in Paul's letters.